On June 27, 1993, in Barassi’s seventh match as coach, Sydney broke its 26-game losing streak with a 40-point victory over the more favoured Melbourne. It seemed that the team and the Club had survived its lowest point.

After three successive wooden spoons from 1992-1994, with Barassi at the helm, Sydney finished the 1995 season in 12th position on the ladder. The team’s on-field performances were bolstered by the recruitment of Paul Roos and Tony Lockett, as well as the development of the Swans’ young players.

Meanwhile off the field, the Swans began to achieve stability under the administration of Chairman Richard Colless, who would go on to become the AFL’s longest-serving chairman.

Following the retirement from coaching of Ron Barassi, four-time Hawthorn Premiership player Rodney Eade was appointed coach. Eade took the Swans to their first Grand Final since 1945 in his first season as a senior coach. From 1996 to 2002 under the coaching of Eade, Sydney contested the finals every year with the exception of 2000 and 2002.

After the first half of the 2002 season Paul Roos, a former Fitzroy captain and Sydney player, replaced Rodney Eade, initially as caretaker coach before being formally appointed senior coach prior to the 2003 season. Roos’ first season as senior coach was a successful one—he took the team to a Preliminary Final, and was also voted Coach Of The Year by the AFL Coaches’ Association. 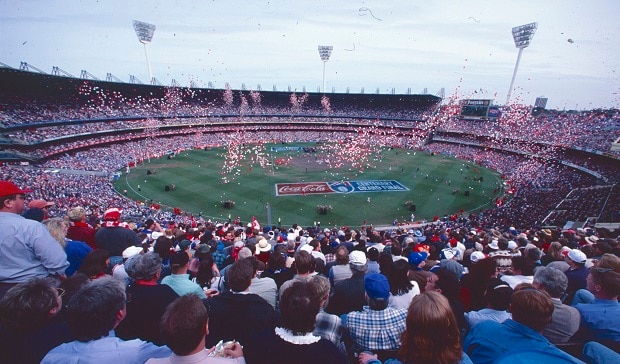 The 1996 AFL Grand Final was the first for the club since the move to Sydney.