A few days after the loss to the Dogs, Longmire assumed the position of Senior Coach, with a message that he was seeking improvement across the playing list.

It was a new era but the transition was extraordinarily smooth. The Swans selected Alex Johnson, Luke Parker and ex West Coast player Matt Spangher in the draft, and added Andrejs Everitt at the trade table.

The 2011 season began in dramatic fashion with a draw against Melbourne at the MCG. However, wins against Essendon and West Coast in the following weeks helped restore confidence, with the Swans going on to achieve 12 wins for the season and make the finals.

The most memorable victory of the year came in Round 23, when the Swans travelled to Geelong to take on the Cats. The Swans had not won in Geelong since 1999, and Geelong was on the verge of its 30th successive win at its home stadium.

But Sydney, led by co-captain Adam Goodes, took to the field with a steely resolve and staged a remarkable 13-point victory over the eventual 2011 premiers. The win broke Geelong’s four-year home ground winning streak.

The win propelled the Swans into the finals, and they travelled to Melbourne to take on St Kilda in an Elimination Final at Etihad Stadium. With strong performances across the board, the Swans prevailed by 25 points – their first away finals win since 2005.

However, the following week Sydney’s campaign came to an end when the Swans went down to Hawthorn by 36 points in the Semi Final at the MCG. Irishman Tadhg Kennelly – who had returned to the Club in 2010 – retired after playing 197 games. 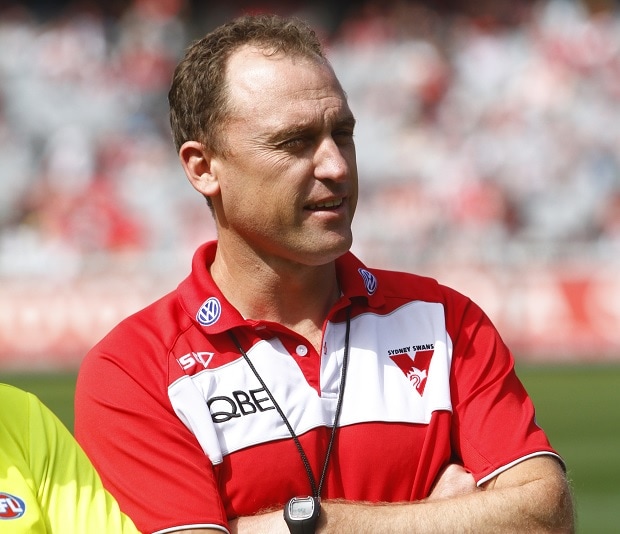 John Longmire took over as coach to lead the new charge of Sydney Swans players.