A transitional period for the Swans followed in 2009, with a number of Sydney’s senior leaders coming to the end of their careers. The unexpected departure of Tadhg Kennelly back to Ireland at the start of the year was a loss for the Swans, but the recruitment of ex-Magpie Rhyce Shaw added a new dimension to the team. However for the first time since 2002, the Swans did not make the finals.

It was the end of an era as Swans greats and 2005 premiership players Michael O'Loughlin, Leo Barry and Jared Crouch retired at the end of the season.

Barry played 237 games and Crouch 223, while O'Loughlin was the first South Melbourne/ Sydney player to pass the 300-game milestone.

At the end of the 2009 season, the club embarked on a bold plan to rebuild the playing list. During trade week the Swans were aggressive and snared five players from other teams: Ben McGlynn and Josh Kennedy from Hawthorn; premiership ruckman Mark Seaby from the West Coast Eagles; prolific forward Daniel Bradshaw from Brisbane; and emerging ruckman Shane Mumford from Geelong.

The changes didn't end there, with another five players coming to the club in the National Draft in November. For the first time since 2002, the Swans had a top 10 draft pick and snared speedy young Victorian Gary Rohan. With pick 14 the Swans added more pace with the selection of WA boy, Lewis Jetta. Sam Reid and Trent Dennis-Lane were chosen with later picks.

Meanwhile premiership coach Paul Roos had announced that 2010 would be his last season at the helm, with the club already anointing his long-time assistant, former North Melbourne player John Longmire, as his successor.

The 2010 season saw Sydney get off to a flying start with wins from five of the first six matches, but then injuries took a toll. Mark Seaby broke his ankle and co-captain Craig Bolton snapped his Achilles. Bolton's injury was a huge blow and he was unable to ever take to the field again for the Swans, eventually being forced to retire after 199 AFL games.

After an up and down patch in the middle of the season, the side rallied as September approached. Along with Roos, co-captain Brett Kirk had also announced that 2010 would be his last season. In Round 21, the Swans played the Western Bulldogs and had a stirring win in front of a large and vocal home crowd, in what was the last match ever for Roos and Kirk at their beloved SCG.

The Swans earned a home Elimination Final and played Carlton at ANZ Stadium. After a strong start, Carlton fought back to hit the lead at three quarter time. But a brilliant last term from new recruits Josh Kennedy and Trent Dennis-Lane – who laid a match-saving tackle and converted the goal – saw the Swans get home by five points.

The Swans travelled to Melbourne the following week to take on the Western Bulldogs, with Bradshaw back in the side after a long injury layoff. In a tense, tight affair, the Bulldogs prevailed by five points. Kirk was chaired from the MCG, having played 241 games since arriving as a rookie from Albury, while Roos finished with what was then the Club record for the most games coached (202).

Despite the disappointing finish, there were positive signs for the future. Dan Hannebery, drafted at the end of 2008, won the AFL's coveted Rising Star Award, and Kieren Jack, a rugby league convert and local Sydney product, won the Bob Skilton Medal for Sydney’s best and fairest player. 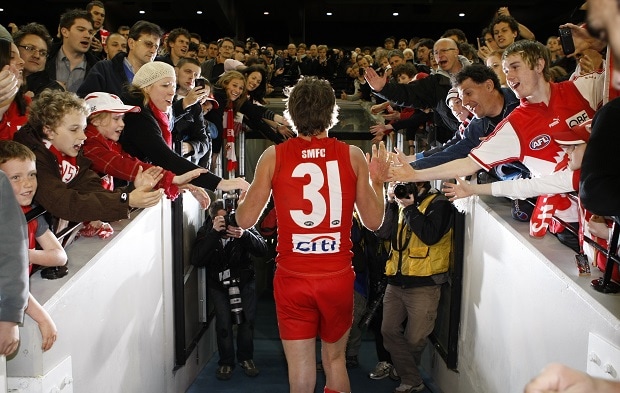 Brett Kirk walks down the race following his last game in the 2010 Semi Final.