The Swans entered the 2012 AFL Grand Final as the underdogs against minor premiers Hawthorn, although the game would prove anything but one-sided. Despite Nick Malceski kicking a stunning goal to open the team’s account at the Punt Road end of the MCG, the Swans trailed in the first quarter.

In the second term the Swans piled on six unanswered goals to hold a 16-point lead at the long break. Then, in the second half, the Swans kicked the opening two goals to lead by 28 points. There was no time to get comfortable however, as the Hawks fought back to trail by just one point at three-quarter time.

Hawthorn broke away early in the final term to hold a 12-point lead midway through. But the Swans dug deep again. Final quarter efforts from Ryan O’Keefe, as well as goals to Dan Hannebery, Kieren Jack, Adam Goodes, and the stunning sealer from Nick Malceski, resulted in the Swans winning their second premiership in seven years and the fifth ever for the club.

The final score was Sydney 14.7 (91) to Hawthorn 11.15 (81) with John Longmire and co-captain Jarrad McVeigh lifting the cup on the MCG after the match. 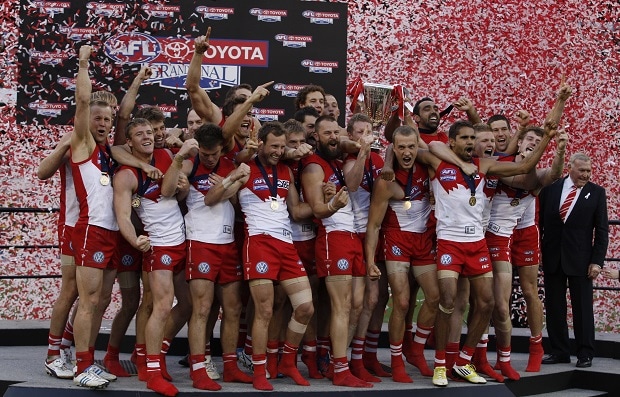 The 2012 premiership side following the Grand Final victory.