The Swans backed up their premiership by making the 2006 AFL Grand Final, once again facing West Coast. Despite trailing by 25-points at halftime, the Bloods displayed all their fighting spirit to get within one point before the siren sounded – losing 12.13 (85) to 12.12 (84).

After coming so close to clinching back-to-back premierships, the 2007 season began with heartbreak again for the Club. The Swans lost to West Coast by a solitary behind in Round 1, the third consecutive match between these two sides decided by one point.

Sydney still went on to make the finals in 2007, finishing the home-and-away season seventh on the ladder. However, a 38-point defeat to Collingwood in the elimination final ended the Swans’ finals campaign, marking the Club’s earliest exit from the finals since 2002.

The following year the Swans were vying to defy the critics again by making their sixth consecutive finals series. They battled their way through injuries throughout the 2008 season, and consequently were able to give six first-year players a chance to debut.  The Swans finished the 2008 season in sixth place and went on to defeat North Melbourne in an elimination final by 35-points. However, the Western Bulldogs ended the Club’s finals campaign the following week. 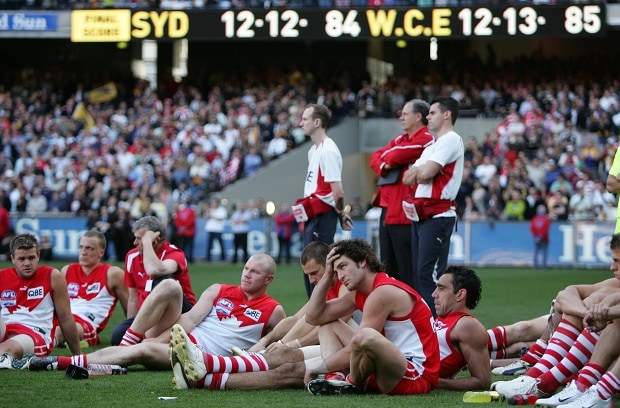